We teach leadership and business development strategies and skills. We work with individuals and firms. We began in 1983. Our longevity is due to our practical and effective approach. We help people identify and overcome their obstacles. We replace old ineffective habits with sensible new, positive habits. We install systems to maintain momentum. We have consulted with professionals in over 1,000 firms.

One of the cornerstones of our consulting is our BizDevCoach® software. It is a unique tool that helps people plan and implement their business development. It provides a comprehensive tutorial and a variety of innovative tools.

We invite you to review all the publications, seminars and tools on our website. We would be happy to talk about our free services that will demonstrate our ability to be of service to you and your firm.

Download our PDF to learn more about Kohn Communications services 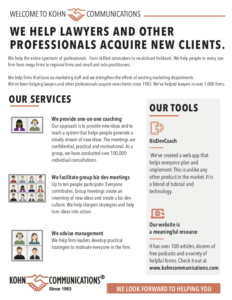 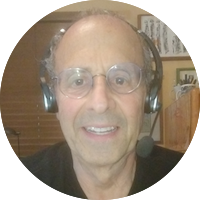 Lawrence M. Kohn is president of Kohn Communications. The firm specializes in assisting lawyers and other professionals in acquiring new clients. The firm has assisted professionals in over 1,000 firms – ranging from multi-nationals to solos. He began his consulting practice in 1983. He was a pioneer in the training technique now known as Executive Coaching. The technique has proven to be remarkably effective in helping his clients integrate new skills into their daily routines. He has personally conducted over 33,000 individual coaching sessions.

Mr. Kohn is the developer of the unique web app, BizDevCoach.com -using a combination of tutorial and technology to help professionals plan and implement an effective biz dev strategy. He is the co-author of Selling in Your Comfort Zone (Safe and Effective Strategies for Developing New Clients), published in 2009 by the American Bar Association and Selling with Honor (Strategies for Selling Without Selling Your Soul), originally published in 1997 by Berkley press, a division of Penguin/Putnam. He has authored and co-authored over 60 articles about marketing and management. Dozens of the articles and free podcasts are available at www.kohncommunications.com.

As an educator, he earned the title of Master Instructor at UCLA Extension, at that time, a title given to only 10 out of over 2500 instructors. In addition to teaching classes in marketing and public speaking, Mr. Kohn taught the course, “Making the Classroom Come Alive” – a required course for UCLA Extension instructors.

Mr. Kohn’s business experience covers a broad range of industries. He began his business career in asset-based lending with Mercantile Financial Corp. In 1972 he founded the small business loan department for Foothill Capital. He then formed his own company, Business Loans, Inc. He created and hosted the radio program, “It’s Your Business.” He was the chairman of the board of 3-Day Blinds, the largest independently owned manufacturer and retailer of window blinds in the country at that time. He has had a broad range of clients including JPL, NASA, United Way, Walt Disney Imagineering, Farmer’s Insurance, Lowe Enterprises, UCLA Extension, Los Angeles County Bar Association, Baker & McKenzie, Hogan Lovells, Norton Rose Fulbright and DLA Piper.

Mr. Kohn is active in the community. He is the past chairman of the Board of Governors of Century City Hospital. As a member of the Board of Governors of the City of Hope, he co-founded their Planned Giving Speakers Bureau. He is the founder and current chairman of Team Beverly Hills, the city’s leadership program. He has been appointed to the Order of the City of Beverly Hills, the highest honor given by the city council. He received the Apple Award from Los Angeles mayor Tom Bradley for educating parents about private funding methods for public schools. He is a past board member of the Maple Counseling Center of Beverly Hills, past president of the Westwood Elementary Charter School PTA and co-founder of the Westwood Elementary Charter School Booster Club. Currently is charitable activity focuses on providing free coaching for non-profit board members to help them develop their recruiting and fund raising skills.

Robert N. Kohn is the Vice President of Kohn Communications, a business development consulting firm with clients nationwide. He has been coaching lawyers in business development since 1990. He has authored or co-authored many articles, and the American Bar Association best-selling book, Selling in Your Comfort Zone.

Mr. Kohn is known as an informative and motivational speaker and instructor. He has been asked to speak or teach at numerous organizations including:

Mr. Kohn has authored and co-authored dozens of articles on marketing which have appeared in numerous publications, including: